Here’s a quick summary of our 5 best Honduran coffee brands!

Having a tough time deciding? Give Fresh Roasted Coffee's Marcala a try!

We'll look at each of these in more detail in our best Honduran coffee list below!

Coffee was introduced to Honduras hundreds of years ago while the country was under Spanish control. Many small, independent coffee farms existed at this time but the coffee industry as a whole was still relatively minute. It was after Honduras gained their independence in 1821 that the coffee industry really starting to gain some momentum.

In the past, only a small fraction of the coffee produced in Honduras was exported. This was due to the lack of an efficient way to transport the beans to the coast to be shipped to other countries. This issue has long since been circumvented, as is quite clear from the current quantities of Honduran coffee beans being exported.

Honduras is now among the top 10 coffee producing countries in the world, and as of 2011, the largest in all of Central America!

Unfortunately, mass production often goes hand in hand with a lower quality product. A quantity over quality mentality was embraced in the past by the Honduran coffee industry. The majority of their exported coffee was destined to be used as part of a blend or cheaper coffee product.

BUT, as the worldwide specialty coffee scene expands, so too does the efforts of worldwide coffee producers.

Being that the coffee growing conditions of Honduras are similar to that of Guatemala, Nicaragua and Costa Rica, the potential to produce fantastic coffee has always existed there. With the implementation of higher standards for quality and a renewed dedication to the entire production process, specialty Honduran coffee was born.

Today, Honduras excels in both the quantity and quality departments. There are many specialty Honduran coffee brands out there that perfectly exemplify what the country is capable of.

Altitudes, for one. Many areas in Honduras have altitudes above 1350 meters. Coffee plants grown at such heights mature more slowly, which leads to a more developed flavor profile. These beans are classified as Strictly High Grown. It’s no coincidence that a large portion of Honduran specialty coffee is Strictly High Grown.

It is for this reason that a large number of coffee farms are situated in central-western Honduras, among the vast mountainous ranges. Ideal climates and nutrient rich soils also contribute to the high quality of Honduran beans.

As the Honduran specialty coffee scene is quite new, and still developing, specific growing regions aren’t too well known by the general public. Most of the time, brands are just advertised to be Honduran coffee. Down the road, it is likely that you’ll start to see single origin growing regions become brands in themselves. For now though, we’ll chat a bit about the regions that our 5 best Honduran coffees come from.

La Paz is one of the 18 departments of Honduras, and is situated in the south-west, sharing a border with El Salvador. The municipality of Marcala has already made a name for itself and is one of the most established origins in the Honduran coffee scene.

Santa Barbara is another of the 18 departments of Honduras, sitting just east of Copán. Santa Barbara is known for their mountains which contain vast mahogany and cedar forests. But wood is not the only thing to be exported from this region. That’s right, Santa Barbara’s forest covered mountains also offer great coffee growing conditions!

Take a peak at Santa Barbara & El Cedral in our list!

Copán is, you guessed it, another one of the 18 departments that comprise Honduras. Copán is located on the west end of Honduras, bordering Guatemala. This region is well known as the site of one of the great cities of Mayan civilization. It’s also starting to be known for its stellar coffee!

You can check out our pick from the region of Copán below!

Different growing regions in Honduras offer some variance in the final taste profile, but you can expect your Honduran coffee to be a little something like this;

As we stated previously, recent years have seen an emergence of many high quality Honduran coffee brands. Here are our picks for the 5 best Honduran coffees. Enjoy!

We’ve noted the availability of whole bean, ground and single serve options for each entry to save you the trouble! 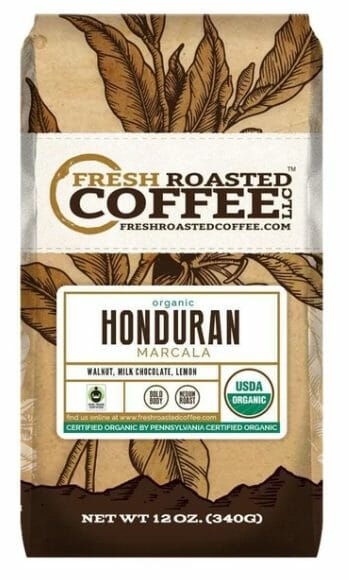 Our first entry comes from Marcala, La Paz. This coffee has everything that you'd expect from the signature Honduran coffee taste profile. Fresh Roasted Coffee showcases why Marcala is already an established region. This product is available in whole bean, ground and single serve options, take your pick!

This coffee is naturally sweet, with notes of milk chocolate & nuts, with a bright citrus-toned bite that sticks around in the finish. Black coffee drinkers and espresso lovers should definitely check this one out!

Next we have Unique Coffee Roasters El Cedral coffee. El Cedral is a municipality located within the Santa Barbara department. This beans are grown at altitudes above 1500 meters and have a seriously well developed flavor profile.

These beans are expertly roasted to a light-medium level, leading to a rich & robust, yet balanced brew. Notes of dark chocolate & nuts are the focus here, while a balanced acidity & sweetness also contribute to the overall profile. This coffee packs a punch, while remaining smooth and never bitter. These beans make a mean espresso shot too!

Our next pick comes from the department of Copán, and is roasted by Teasia. This growing region is situated right next to the Guatemalan border and offers highly elevated strictly high grown conditions.

This coffee is defined by its bright, zesty bite. The fruity flavor is also complimented by notes of roasted nuts & a honey toned sweetness. This flavorful cup comes to clean finish, with lingering subtle hints of lemon. This is another one for black coffee drinkers, it would be a shame to mask all of the intricacies going on here!

Another one from Santa Barbara, this time roasted by Monte Vista. Only the most ripe coffee cherries are picked to be included in this product! Monte Vista contributes to fresh drinking water & educational efforts for those in need in the the surrounding areas. Great roaster, great coffee!

This coffee has a wonderfully sweet, floral aroma that will immediately ctach the attention of anyone nearby. A sweet & well balanced flavor includes notes of chocolate, caramel & fruit. This one is deceptively strong, it packs a serious punch in spite of the balanced taste. A subtle taste of chocolate lingers after the cup is complete, making a second cup a must.

Our final coffee is another from the established region of Marcala, La Paz. These beans are produced by Cafe Don Pablo and marketed under the brand Suble Earth Organic Coffee. Unsurprisingly, these beans are organically grown!

This coffee is sports the signature Honduran taste profile with one notable difference, a lower acidity. So you're getting that rich, sweet taste & aroma, notes of milk chocolate & honey, without the bright bite. If you prefer a low acid coffee, this is definitely your best bet!

And that’s that. Hopefully you found a Honduran coffee that intrigues you! What’s your favorite Honduran bean?

Have any recommendations for us? Let us know!